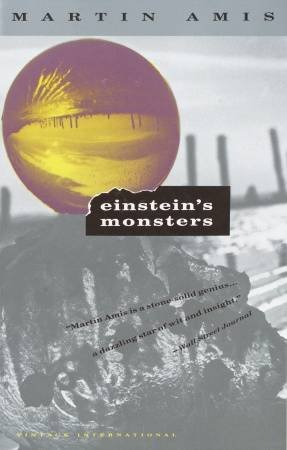 Some readers might like to read the introductory essay last or later. It is polemical, whereas the stories that follow were written with the usual purpose in mind: that is to say, with no purpose at all-except, I suppose, to give pleasure, various kinds of complicated pleasure. Previously I had managed only four short stories in sixteen years; these five came successively over the last two years-and then they stopped. If the stories also arouse political feelings then that is all to the good. In this debate, in this crap game, I do want to get my chip on the table, however thin, however oddly colored, however low its denomination. "Einstein's Monsters," by the way, refers to nuclear weapons but also to ourselves. We are Einstein's monsters, not fully human, not for now. May I take the opportunity to discharge-or acknowledge-some debts? In order of composition: "The Time Disease" owes something to J. G. Ballard; "Insight at Flame Lake" to Piers and Emily Read and to Jack and Florence Phillips; "The Little Puppy That Could" to Franz Kafka and to Vladimir Nabokov; "Bujak and the Strong Force" to Saul Bellow; and "The Immortals" to Jorge Luis Borges and to the Salman Rushdie of Grimus. And throughout I am grateful to Jonathan Schell, for ideas and for imagery. I don't know why he is our best writer on this subject. He is not the most stylish, perhaps, nor the most knowledgeable. But he is the most decorous and, I think, the most pertinent. He has moral accuracy; he is unerring.

I was born on August 25, 1949: four days later, the Russians successfully tested their first atom bomb, and deterrence was in place. So I had those four carefree days, which is more than my juniors ever had. I didn't really make the most of them. I spent half the time under a bubble. Even as things stood, I was born in a state of acute shock. My mother says I looked like Orson Welles in a black rage. By the fourth day I had recovered, but the world had taken a turn for the worse. It was a nuclear world. To tell you the truth, I didn't feel very well at all. I was terribly sleepy and feverish. I kept throwing up. I was given to fits of uncontrollable weeping… When I was eleven or twelve the television started showing target maps of South East England: the outer bands of the home counties, the bull's-eye of London. I used to leave the room as quickly as I could. I didn't know why nuclear weapons were in my life or who had put them there. I didn't know what to do about them. I didn't want to think about them. They made me feel sick.

Now, in 1987, thirty-eight years later, I still don't know what to do about nuclear weapons. And neither does anybody else. If there are people who know, then I have not read them. The extreme alternatives are nuclear war and nuclear disarmament. Nuclear war is hard to imagine; but so is nuclear disarmament. (Nuclear war is certainly the more readily available.) One doesn't really see nuclear disarmament, does one? Some of the blueprints for eventual abolition-I am thinking, for example, of Anthony Kenny's "theoretical deterrence" and of Jonathan Schell's "weaponless deterrence"-are wonderfully elegant and seductive; but these authors are envisioning a political world that is as subtle, as mature, and (above all) as concerted as their own solitary deliberations. Nuclear war is seven minutes away, and might be over in an afternoon. How far away is nuclear disarmament? We are waiting. And the weapons are waiting.

Indeed they are remarkable artifacts. They derive their power from an equation: when a pound of uranium-235 is fissioned, the liberated mass within its 1,132,000,000, 000,000,000,000,000 atoms is multiplied by the speed of light squared-with the explosive force, that is to say, of 186,000 miles per second times 186,000 miles per second. Their size, their power, has no theoretical limit. They are biblical in their anger. They are clearly the worst thing that has ever happened to the planet, and they are mass-produced, and inexpensive. In a way, their most extraordinary single characteristic is that they are manmade. They distort all life and subvert all freedoms. Somehow, they give us no choice. Not a soul on earth wants them, but here they all are.

I am sick of them-I am sick of nuclear weapons. And so is everybody else. When, in my dealings with this strange subject, I have read too much or thought too long-I experience nausea, clinical nausea. In every conceivable sense (and then, synergistically, in more senses than that) nuclear weapons make you sick. What toxicity, what power, what range. They are there and I am here-they are inert, I am alive-yet still they make me want to throw up, they make me feel sick to my stomach; they make me feel as if a child of mine has been out too long, much too long, and already it is getting dark. This is appropriate, and good practice. Because I will be doing a lot of that, I will be doing a lot of throwing up, if the weapons fall and I live.

Every morning, six days a week, I leave the house and drive a mile to the flat where I work. For seven or eight hours I am alone. Each time I hear a sudden whining in the air, or hear one of the more atrocious impacts of city life, or play host to a certain kind of unwelcome thought, I can't help wondering how it might be. Suppose I survive. Suppose my eyes aren't pouring down my face, suppose I am untouched by the hurricane of secondary missiles that all mortar, metal, and glass has abruptly become: suppose all this. I shall be obliged (and it's the last thing I'll feel like doing) to retrace that long mile home, through the firestorm, the remains of the thousand-mile-an-hour winds, the warped atoms, the groveling dead. Then-God willing, if I still have the strength, and, of course, if they are still alive-I must find my wife and children and I must kill them.

Although we don't know what to do about nuclear weapons, or how to live with nuclear weapons, we are slowly learning how to write about them. Questions of decorum present themselves with a force not found elsewhere. It is the highest subject and it is the lowest subject. It is disgraceful, and exalted. Everywhere you look there is great irony: tragic irony, pathetic irony, even the irony of black comedy or farce; and there is irony that is simply violent, unprecedentedly violent. The mushroom cloud above Hiroshima was a beautiful spectacle, even though it owed its color to a kiloton of human blood…

In the discursive sphere there are several ways of writing badly about nuclear weapons. Some people, you finally conclude, just don't get it. They just don't get it. They are published versions of those bus-stop raconteurs who claim that nuclear war won't be "that bad," especially if they can make it down to their aunt's cottage in Dorset (or, better still, if they are already in their aunt's cottage at the time). They do not see the way nuclear weapons put everything into italic capitals. Failing to get the point about nuclear weapons is like failing to get the point about human life. This, in fact, is the basis of our difficulty.