Martin shrugged. "What about the Mall? It's big, enclosed, and it'll be busy. He can look at all sorts of stores."

"You're crazy!" protested Keith. "You want to take an alien to a mall full of people?"

"A mall full of people that'll be paying attention to their shopping and not to four kids on summer break." said Davy. "Not even one whose only apparent peculiarities are white hair and a weird cap. I think Martin's got a good idea."

"I think you're both nuts." said Keith.

"Does that mean you don't want to tag along?" said Martin, a little sadly.

"You kidding?" said Keith. "I wouldn't miss this for anything. Besides, if you three get into trouble, somebody's gotta get you out of it."

The four youngsters carefully made their way to Davy's treehouse. Among other stuff stashed up there was some Halloween make-up paint. Most of it was pretty brightly colored, but some careful mixing resulted in a color that looked fairly normal. There was also an old cap that Martin carefully cut a couple of holes into. Jahv donned the cap. "Ouch." remarked the alien. "That sort of pinches, but I guess it'll be okay."

Keith went through a few boxes and came up with a pair of sunglasses. He handed them to Jahv. "How am I supposed to keep these on my head?" asked Jahv.

"They fit over your — uh, ohhh…" Davy suddenly remembered that Jahv's antennae were his ears. The boy didn't have ears on the sides of his head for the sunglasses to fit over. "Keith, there should be an elastic strap in that box. Try to find it, okay?"

Keith brought the strap over just as Davy finished painting Jahv's face and neck. "I hope you don't sweat too much." said Davy. "If your face starts to run, we could have a real problem."

"Sweat?" asked Jahv. "Oh. My people can control that. I'll just remember not to."

Davy used the strap on the sunglasses, to wrap them around Jahv's head. He brushed the boy's hair over the strap and the sides of the glasses, so no one could tell that they weren't placed over ears. Jahv's hair was incredibly light, almost feathery to the touch. There was an old mirror in one corner of the treehouse, which Martin brought over. "See how you look." he said. Jahv grinned widely. "I'm a human! Let's go to the Mall!" 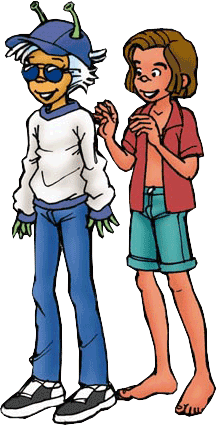 Shortly after, with Jahv dressed in an oversized sweatshirt, jeans, and sneakers — and hanging tightly onto Davy while riding on the back of Davy's bike, the four friends set out for the local Mall. Jahv had also brought along his seemingly bottomless backpack. The boys parked their bikes, and Jahv studied the huge building that comprised the Mall. "Big." he commented. "Primitive, but big."

The foursome entered, and Davy asked what Jahv wanted to see first.

"Everything!" the alien said.

Close by was a large bookstore, and Jahv seemed fascinated by the place, so the four boys headed into the store. The first thing Jahv did was to pick up a novelization of the recent Star Wars movie. He fanned through the pages at an impossible speed. "I think I've heard of some of these races," he commented. Then he picked up a Star Trek book and fanned through it the same way. "And I know I've heard of some of these. Under different names, of course. I'm amazed that you've heard of them on this planet."

"Talk about your final frontier," remarked Davy, not entirely believing what he was seeing.

"Yeah, in a galaxy far, far away." added Martin.

"Wonder if he knows he's reading fiction?" questioned Keith. The boy looked around, concerned. Jahv's antics were attracting a bit of attention, especially from a couple of store employees who probably thought Jahv was playing with the books and mishandling them. Jahv was still racing through the science-fiction books, and his reactions varied anywhere from astonishment that some races that he apparently knew of had somehow become known on this world, to outright amusement at what some other writers described alien life as being. Finally, Jahv let out a burst of laughter that was way too loud for a bookstore. "They call that alien life? I know a couple of worlds where they call it breakfast!"

That was enough for Keith. He glared at Davy and Martin, and motioned towards the exit. Then he walked over to Jahv and said quietly, "I think we should find another store."

"You're attracting a bit too much attention there, Speedy." said Keith.

Jahv looked around and saw the two store employees, and a couple of customers, glaring at him. "Oops. Sorry. I kind of get like that around books." Jahv put the book down and he and Keith left the store.

They would have stopped in a music store, but some sort of heavy metal was blasting from within, and it made Jahv wince and his antennae twitch. They headed away. "Please tell me something was wrong with the equipment in there." said Jahv.

"Uhh, not really." said Davy, but he didn't blame Jahv for his reaction. He didn't like that racket too much, either.

The group found a toy store next and wandered in. The first thing Jahv noticed was a display and demonstration model for a video game system. "A simulator!" he said.

"This!" said Jahv, grabbing the control and pressing the start button. The game was a flight attack game, and seconds later, Jahv had racked up a considerable score. Then the game shut down as its demonstration timer expired. "Hey!" snapped Jahv.

Davy looked at Keith. "Arcade?" Keith nodded. "Arcade. No one will notice him in there, and I've got a few bucks on me for tokens."

Before they got to the arcade, though, they passed a pet store. Martin liked looking at the tiny puppies and kittens, so the group agreed to go in.

Jahv looked around. "What is this place? A miniature wildlife park?"

"Don't you people have pets?" asked Keith quietly. "You know, little animals that you keep around for companionship, or just for the heck of it?"

Jahv shook his head. The pet store always kept at least one puppy and one kitten out in the open for customers to view and carefully handle. The rest of the store's animals were in caged enclosures towards the back of the store. Martin had headed back there, and was cuddling a tiny kitten. A large white puppy was sniffing around customers' feet. Then Jahv approached. The puppy came over, and stopped in its tracks. It huffed a few times, and looked terrified. Then it threw its head back and howled. That noise set off every animal in the store, and the kitten Martin was holding squirmed to get free.

"Time to go, I think!" urged Keith, practically dragging Jahv out of the store while Davy retrieved a confused Martin. Once outside the store and on the way to the arcade, Keith remarked to Jahv, "You ever think of changing your deodorant or something?"

"My what?" asked Jahv, confused.

"Actually, it probably was his scent that scared those animals." suggested Davy. "Jahv, have you had any problems with wildlife near the pond?" Davy knew that there wasn't anything really big out there, but rabbits and raccoons had been seen at times, and plenty of birds.

Jahv shook his head. "I've seen a few small animals, but they run from me."

"Which is probably why we didn't figure this out until now." said Davy. "Jahv probably smells really strange to animals, and they don't like it."

"So much for bringing my dog by to meet Jahv." said Martin, a little sadly.

The group reached the arcade. Jahv looked decidedly enthusiastic, Martin less so. The younger boy really wasn't very good at video games and he didn't like them very much, and he certainly didn't like all the noise coming from the place. But he knew he was safe with his friends. Keith went off and brought back a large handful of tokens for the video games, and Jahv had located a game similar to the one he had played in the toy store. Minutes later, he had racked up a score far higher than any achieved. Martin and Davy were watching the game, but Keith was still looking around every so often.