"Of course." both Davy and Niklas agreed.

"Secondly — please come and visit as often as you can." said Jahv. "I'm alone here. I can live with that. But I don't want to be lonely."

Ones we can trust."

"Thank you." said Jahv. "And now I will say farewell, for now. Thank you again, for being my new friends."

Jahv entered the tent and closed the flap. And any sign of the tent, or Jahv, disappeared.

"Probably has to clean out the closet in there or something." remarked Davy.

"You know, if this hadn't happened to us, I wouldn't believe it." said Niklas, as the two headed back to where they'd left their clothes near the pond. "Even now, with him in there, it's like it never happened. But it did, didn't it! We actually have a friend from another planet!"

They found the pile of clothes. There was a silver spacesuit in the pile. "It happened." said Davy, grinning. "And you're right. This is very cool. You think our friends will believe it?"

"They will." said Niklas.

Davy had invited Keith and Martin over to swim in the pond near his home, and on this hot summer day, the two boys had gladly accepted the invitation. Privately, Davy was hoping for the opportunity to tell his two friends about Jahv, the young alien boy that he and Niklas had rescued about a month ago. He'd had several opportunities to speak with and play with Jahv, but he suspected that the alien was getting a little bored and wanted to meet some new people.

It didn't quite happen as well as Davy had hoped. Since Jahv's dome tent was invisible, there was no way of knowing where the boy actually was unless he was outside of the tent. Davy didn't see him around, and although his green skin allowed him to blend in fairly well with the nearby trees, his shock of white hair was a dead giveaway most of the time.

Keith and Martin, hot and sweaty from their bike ride over to Davy's, wasted no time diving into the pond, Martin in his underwear, and Keith not even bothering with that much. Davy had taken off his shirt and shoes, but wasn't in the pond. He was looking for Jahv. Who turned up in the last place he had thought of to look. Apparently the alien could hold his breath for a lot longer than the average human, because he came up out of the pond right next to Keith, who was so startled by the sudden appearance of the strange being that, had he been capable of it, probably would have shot straight out of the water and run all the way back to shore across the surface of the pond.

As it was, Keith let loose a couple of expletives and fell back several steps, stumbling on the last one before recovering his balance.

About ten feet away, Martin was frozen in place, eyes as wide as saucers. 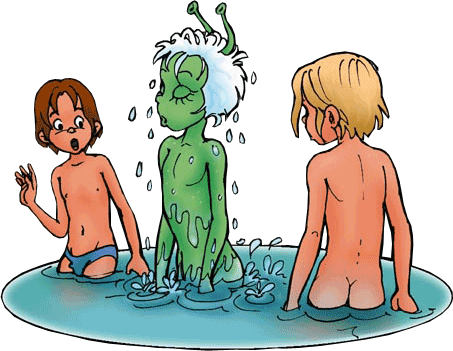 Davy was on the shore, having finally seen what was going on, and groaned. So much for preparation.

Keith was sputtering almost incoherently, and coughing up some pond water, but he did manage to get out, "Davy! What the — " *sputter* *cough* "- have you got in this pond!?"

Davy waded out to Keith and Jahv, gently side-stepping Martin, who hadn't budged since Jahv had risen to the surface. Davy suspected that if anyone so much as touched the younger boy, he'd probably let out a scream that would have been heard all the way back to Jahv's home planet, wherever that was. "Uh, Keith, Martin, this is a friend of mine. Jahv." said Davy, deciding to go for a direct introduction and let the questions fly after. "Jahv, this is Keith and Martin."

Jahv smiled politely. "Hello." he said. "Davy, is that little one you call Martin over there all right? He hasn't moved."

Keith had recovered from being startled, and at this point wanted answers. "Davy, what the heck IS this — this — what is he?"

Keith glared at Davy. "Okay, I guess I can't come up with any other explanation for why somebody with green skin, white hair, two antennae on his head, and oversized purple eyes would be standing in front of me, so let's try a different question. What's he doing in the pond?"

"Taking a bath." replied Jahv. "The plumbing broke down in my dome tent. I can fix it, but it'll take time."

"It's cloaked. Invisible. You can't see it." replied Jahv.

"Oh, of course." replied Keith. "Now, would somebody please wake me up?"

"He ran away from home." explained Davy.

"Well, technically, he beamed away from home, but it's the same principle." answered Davy. Keith just glared. Davy looked over at Martin. The boy hadn't moved. Davy wasn't sure he'd even blinked since Jahv had appeared. "Hey, Martin! Come on over here! He's friendly!"

"Yeah, don't have an accident over there or anything," remarked Keith. "For all we know, this guy would regard it as an act of war."

"Just how barbaric do you think I am?" huffed Jahv. "My people are peaceful explorers!"

Martin still didn't move. Finally Jahv waded over, slowly, and extended his hand. "I won't hurt you. I'm very pleased to meet you." Martin blinked, and looked at the green hand which only had three fingers and a thumb. "You've only got four fingers." he said timidly.

"Or you've got an extra." replied Jahv. "I suppose it depends on who you ask."

Very cautiously, Martin accepted the handshake. He felt a slight tingle go up his arm. "What was that?"

Davy and Keith had come over to the edge of the pond, and all four boys emerged. "Davy, how long have you had him here?"

"About a month." explained Davy. "He showed up when Niklas and I were out here swimming one day. He really does have a tent home here, and it really is invisible."

"And I really did run away from home." said Jahv.

"My parents never paid any attention to me. Never let me do stuff I wanted to do. Just hauled me all over the place where they needed to go."

Keith nodded. "I can relate. I sort of get the wrong kind of attention at home."

"So you live here at the pond all the time?" asked Martin.

"Yes, and that's something I wanted to talk about, Davy." said Jahv. "I hate to say it, but I have been getting a bit bored. I wish I could, even just once, see something more of your world than this. Like where you go when you're not at home or here at the pond."

"I don't see how that could possibly work." said Davy, reluctantly. He wished he could take his alien friend around.

Martin was suddenly thinking, though, no longer as afraid as he had been. This Jahv was a pretty neat kid, he had decided, and he wanted to help. "It might be possible," he said.

Martin was still thinking. "Okay, first we'd have to hide those antennae. Could we hide them under a cap?"

Jahv recoiled. "These are very delicate. They're what I hear with. They might get crushed."

Martin considered that one. "Okay, how about this. we cut a couple of holes in a cap for them to stick out. And people think they're part of the cap."

Davy raised his eyebrows. "That could work, but what about the rest of him?"

Martin thought some more before answering. "We could paint his face a regular color, and give him dark glasses to hide his eyes. If he keeps his hands in his pockets or something, no one will notice those."

"What about the white hair?" asked Keith, still skeptical, although Jahv was grinning widely. "And where do you suggest taking him?"